“Due to the efforts of the Ogden boys, Kevin Hogan and Churchill Scott, the Gov. Clement Shelter is now in A-1 condition. In August, 1967, the roof was replaced for the first time since 1929 to the best of our memory.” (LTN February, 1968)
Source: Paul Woodward, Long Trail System Shelter History, 1999 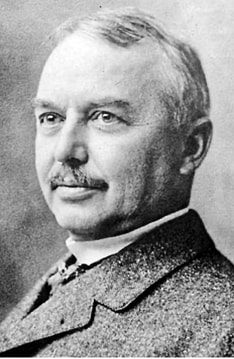 “Percival W. Clement, a Rutland native, business tycoon and reported arch-rival of the Proctor family took over as owner-publisher of the Rutland Herald in 1882. He was elected mayor of Rutland fifteen years later in 1897.

“In 1902 Clement ran for governor for the first of what would be three times. He was ultimately elected in 1918 at age 73 after two bitter defeats both involving Fletcher Proctor and his supporters.

“Governor Clement died at age 80 in 1927. The Rutland Herald was then passed to his son-in-law, William H. Field. William was also a Rutland native who had previously been a successful executive at the Chicago Tribune and a co-founder of the New York Daily News. William made many changes to the Herald including adding its first comic strip, Little Orphan Annie, in 1934. A year later on March 15,1935 when facing progressive vision loss and ultimate blindness William took his own life. He was 57 years old.”

Source: A Timeline of the Herald’s Own History: Two Hundred Years of Reporting the News; www.rutlandherald.com; December 7, 2019

Governor Clement had extensive business interests during his adult life both locally and throughout the country. He was a partner in the family’s marble quarrying business, an active leader in the railroad industry in the 1880s and 1890s, developed real estate in cities across the United States, and served as “cashier” of the Clement Bank, a local bank founded by his father in 1883. Upon the Governor’s death in 1927, the Rutland Herald published the following in a memorial to the him:

“As a citizen, business executive and Governor of his native state, Percival Wood Clement carried into those important relationships a very definite sense of personal responsibility. Honor, integrity and fairness were in his blood and dominated his life. To those most closely associated with him, he was a friend who could ever be depended on. The call of a friend for help never went unregarded.” (Rutland Herald, January 1927)

“Herb Haley’s farm, a few miles south (of Killington) on The Trail, is a plain enough place, but after days of camping it looms up with an air of grandeur; and to sit down to a table of good things, well served, with clean linen and beds like those at home to retire to after a chat with a couple that any state would be proud to have called typical citizens, is a treat”.
Source: From Silent Cliff to Stratton, by Herb Wheaton Congdon; The Vermonter: The State Magazine; Vol. 27, 1922